December <Reading Picture Books with Authors> Event
Adorned with Christmas lights and cheery characters drawn in white on the store windows, the Beautiful Store bookstore opened its 39th <Reading Picture Books with Authors> Event.
Employees of the store wore Santa hats, adding to the cheery holiday spirit.
As always, the event commenced with a musical performance. The Gayakgoul kids group and 3 sisters(Hemi, Yulmi, Somi) performed a medley of Christmas carols on the traditional Korean instrument, the gayageum. The children and other audience members sang softly along to their playing, and the store was filled with a gentle warmth.
Next was a storytelling performance by a new group (Junsang Cho, Eunjung Park, Jihyun Im) who told the tale of three mismatched socks on the search for a new home and purpose. The story was originally written by Jeongjin Lim, the planner of the <Reading Picture Books with Authors> Event. Despite it being the group’s first time presenting, the audience members were delighted by the story, laughing at the socks’ antics and sighing whenever the socks felt lonely.
Third in the event’s agenda was an English storytelling performance by international storyteller Alicia Dong Joo Bang. With some help from the children in the audience, Mrs. Bang told two stories; one of a clever fox who tricked a mouse into sharing a ripe strawberry with him, and one of how the rabbit came to have a short tail.
This month’s featured author was Sang-keun Kim. His picture book “A Mole’s worry” told the story of a lonely mole, who following his wise grandmother’s words, was able to find a solution to his problems while also helping others. Mr. Kim also had a short animated version of the tale, which he played for the audience as well. He handed out the mini-books where he had first practiced and brainstormed his ideas. Afterwards the children were given markers and paper to draw whatever they liked, and the volunteers of the Beautiful Store helped cut them out and stick them onto styrofoam balls for the children’s own peculiar snowballs.
Lastly, audience members were able to receive signatures and take Polaroid pictures with Sang-keun Kim.
We look forward to having more special events where children will be able to interact with authors in the future. 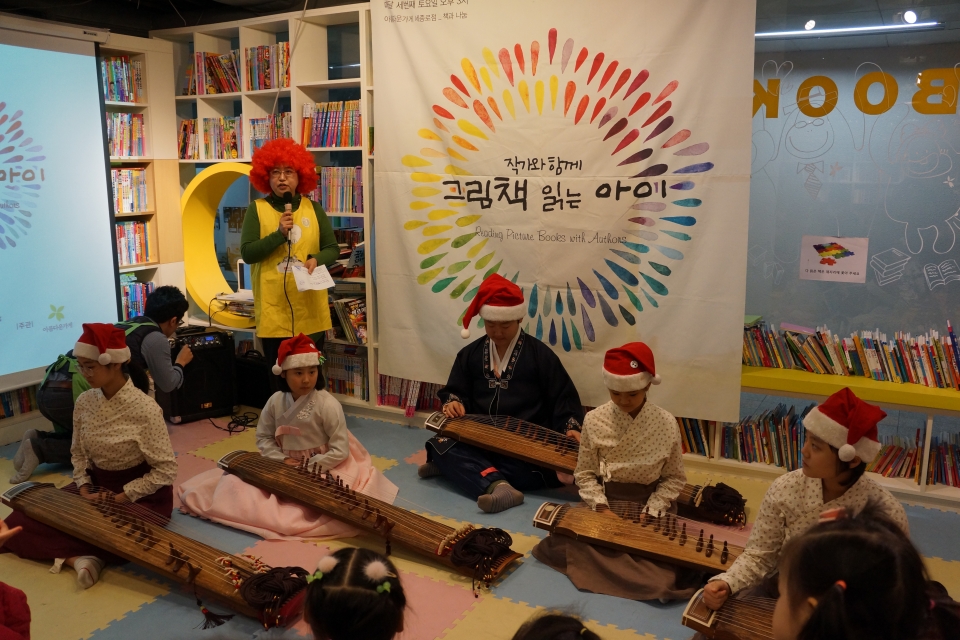 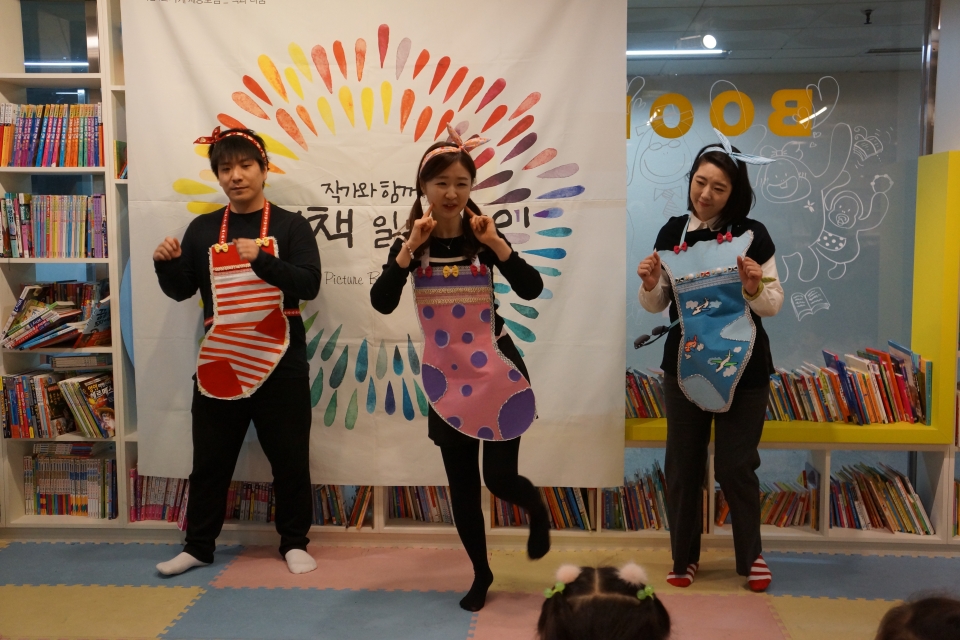 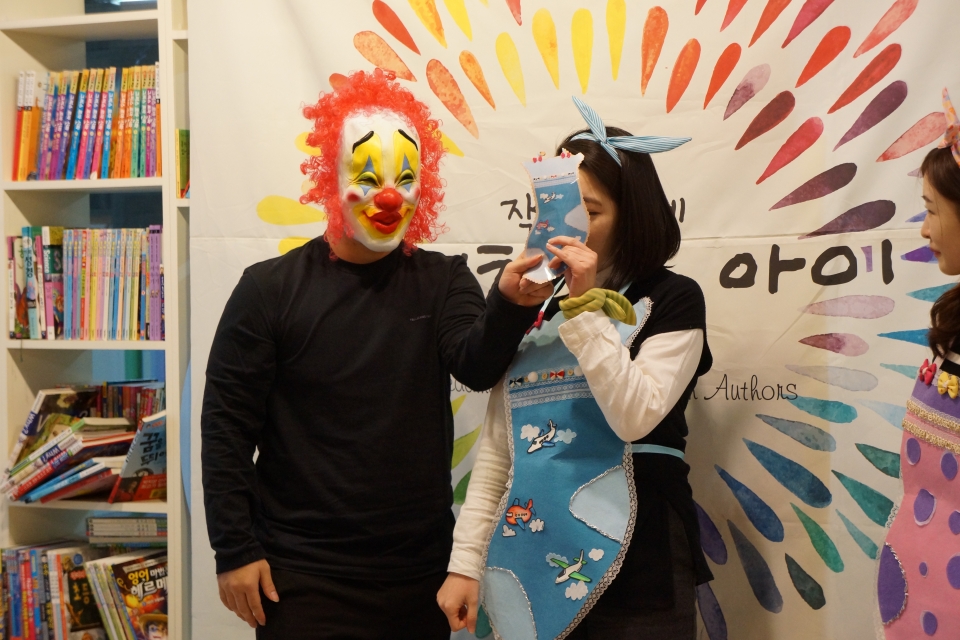 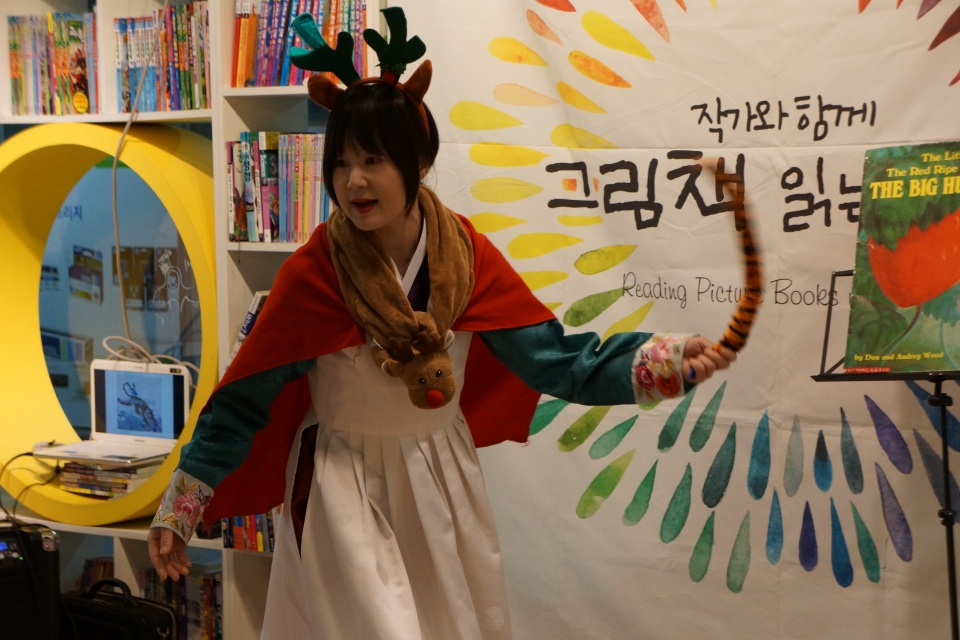 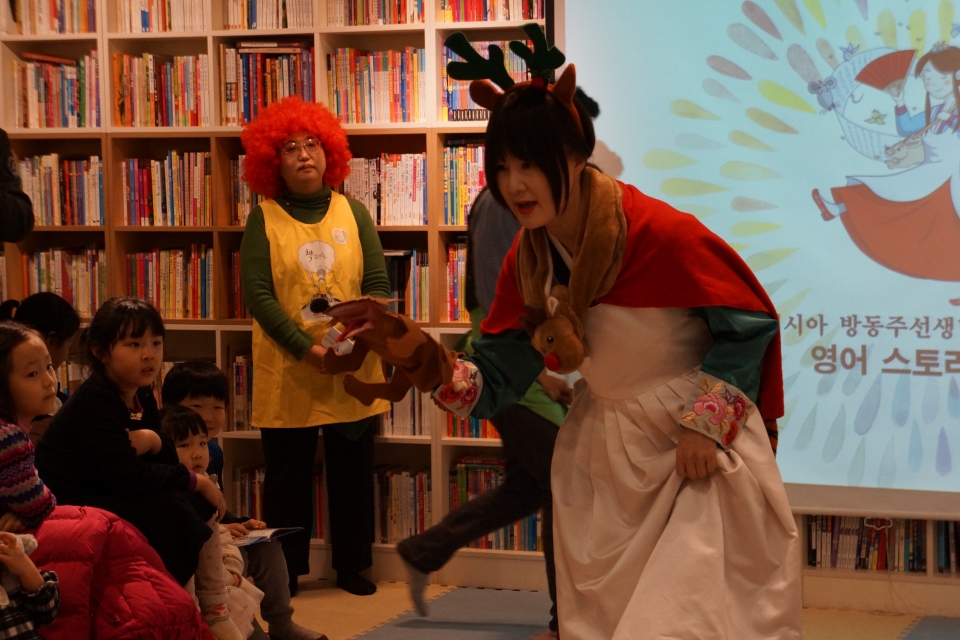 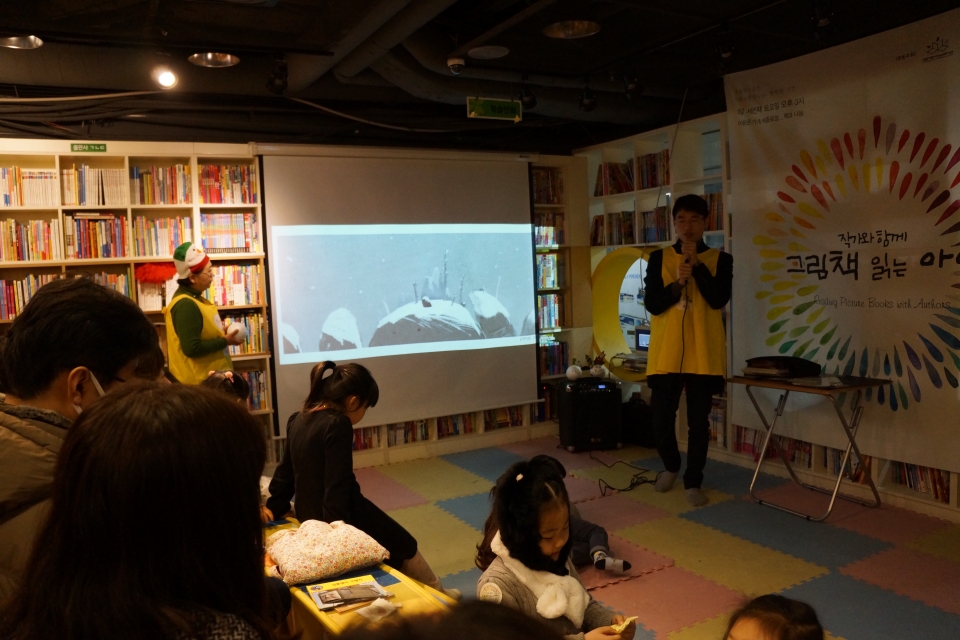 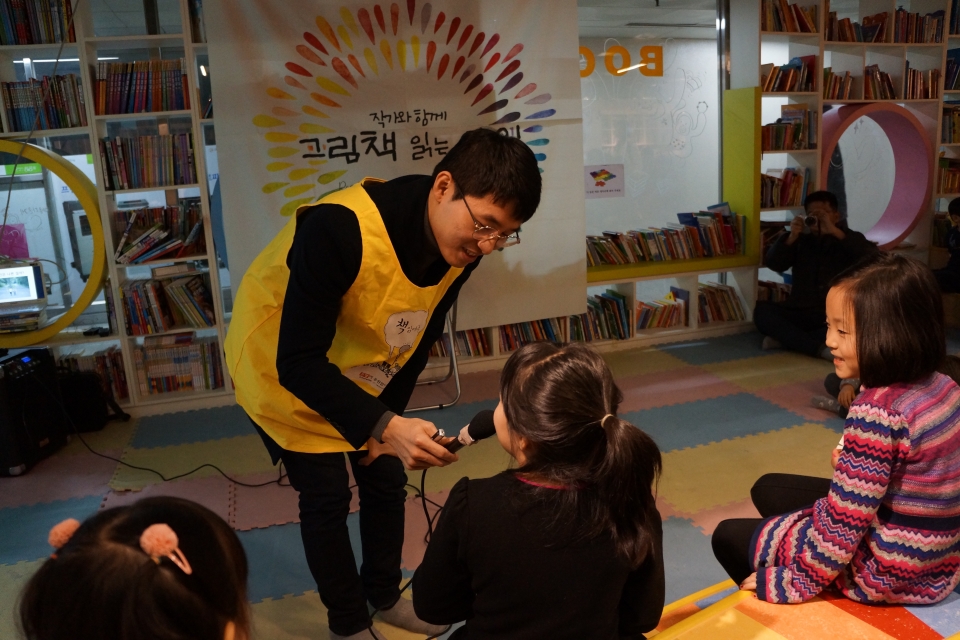 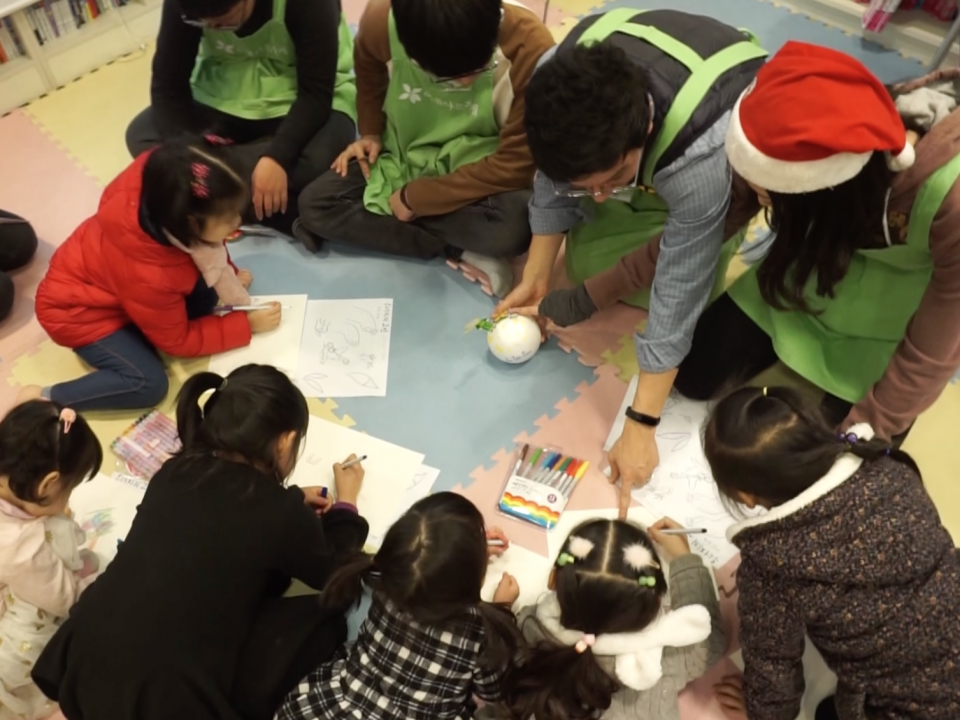 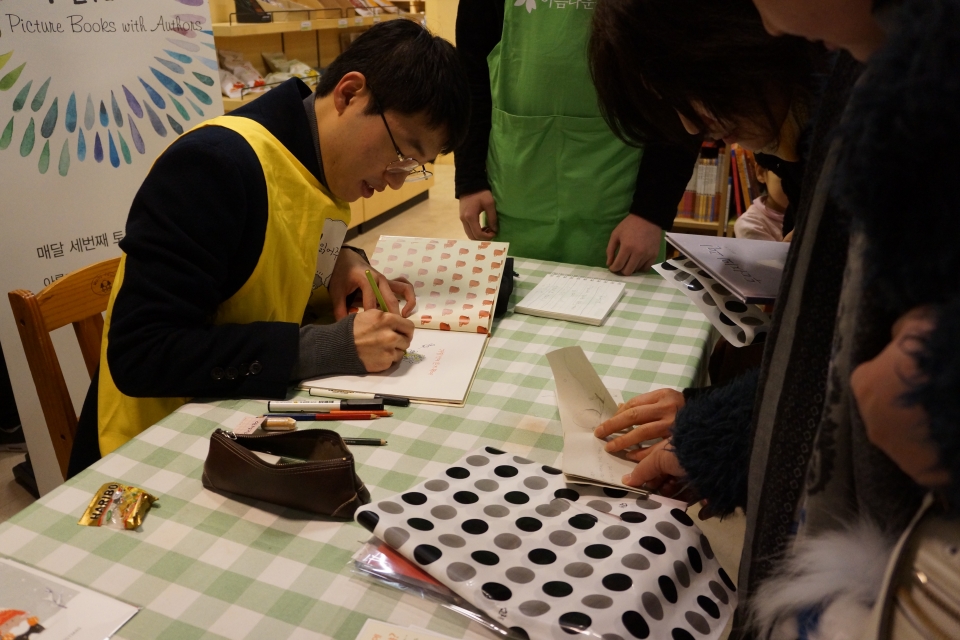 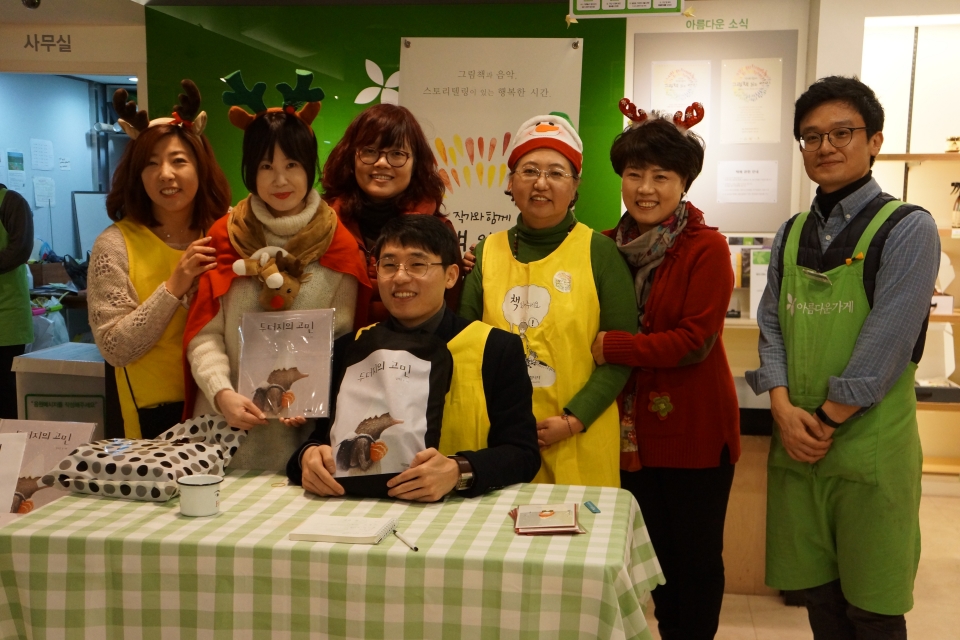